Hello everybody 😘 I hope you’re all well 🌸 At the moment I don’t have internet at home so I don’t get to blog as much as I would like to but hopefully when I get my 3G back on my phone I can update here more. When it comes to beauty related posts its okay since I can plan those and post them whenever, but when it comes to general chit chat I have to wait until I’m in an area with Wifi. It’s a hard life 😂

A couple of weeks ago I posted two posts which got a fair amount of feedback, one about applying for a new job and the other about asking the guy I liked to hang out, rather than waiting for him to ask me (mad times). I’m pleased to say that both of these scenarios ended well. I got the job!! The job is on a make-up counter and it is full time hours which is fabulous and I feel so lucky. I find that when searching for counter jobs it’s really hard to find any positions that are full time so this job truly is a blessing, they already have an account manager too so I don’t have to take on any big responsibilities. Where I’m working now, the only way I would be able to work full time is if I became the account manager. As much as being an account manager would be exciting, I’m more than happy to not have that pressure so this new job really is perfect for me. I’m so glad that I decided to apply for the role, as initially I wasn’t going to since I felt disloyal to the company I work for now but after thinking about it I decided to definitely go for it as at the end of the day, I can’t live off the hours I am currently being given. Sometimes you have to think about whats best for yourself and not worry about other people. We all have to look out for ourselves first and foremost! I did feel a little worried about telling my current manager because she’s so lovely, but even so I wasn’t going to give up the chance to work full time. Luckily my manager was really nice and understanding and we will still be working close together as the two counters are side by side, I will actually get to see her more now! I am so excited to start working full time, it will be so much better for me as I think it will definitely give my life more meaning. Being at my Nans right now can be really depressing some days, so at least if I have a job to go to everyday I’ll have something to get out of bed for and my bank account will definitely be thanking me I am sure.

Now onto the ‘new guy’ part of this post. So I did ask my ex to hang out and he said yes, which is fab. However I last saw him 3 weeks ago now and since then I have met someone else who I really quite like and it’s changed how I feel completely. Don’t get me wrong, I will always care for my ex and I will always be here for him if he needs me, but I realise that the feelings I thought I had for him aren’t real anymore. I know now no matter what I don’t want to get back with my ex and it feels like such a relief to be free of him. It’s crazy how these feelings have just vanished, to think a week ago I was ‘in love’ with old Bae and now I just don’t feel any romantic feelings towards him. I’m more than happy to be just his friend. I realise the saying ‘One day you will meet someone who makes you realise why it never worked out with anyone else’ is true. 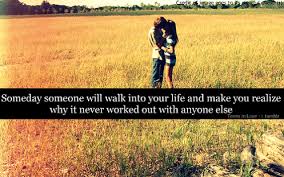 Let’s just take a moment to talk about this new guy then! I met him on a night out through some friends and I instantly had an attraction to him. I wasn’t even supposed to go out that night but I am so happy that I did. I saw him again a couple of days later on another night out and thats when we got talking. We messaged on facebook and then we went out to Nandos! I was so nervous, I’m not used to going on dates. I felt so self conscious but I was happy to be there still. I’ve seen him a couple of times now since we went to Nandos and each time I see him I like him more and for once I actually feel happy. I’m not constantly feeling worried or insecure anymore which is refreshing. It’s very rare that I meet someone who I actually have a genuine interest in so I’m excited to finally have met someone that I do like. I really hope that things progress with this new guy because I do like him ☺️

Well thats my little update for you, since I told you I would fill you in on all that happened.

February favourites will be posted soon as will my February reflections. I can’t believe it’s almost March already!