‘Yeah we danced on tabletops and we took too many shots’

Friday afternoon was a chilled one, I was sat at home in bed, eating my raisins and watching Pretty Little Liars when my friend Chantal hit up the group chat asking if anyone was up for a night out.

Hell yes I was on that ting!

So Dad bought me home a Chinese takeaway for dinner, I showered and got ready and then Chantal and Emily picked me up and we headed to our friend Louise’s house for pre drinks.

Pre drinks was so much fun because we played drinking games such as Picolo and Never Have I Ever. For some reason it had felt like ages since I last had a good drinking games sesh so this was much needed and the girls and I had such a giggle as we called each other out on all the scandalous things we’d done and I was reminded of the very messy night I’d previously had at Louise’s house around this time last year*.

*Flashback to 2016 at Louise’s Easter party, where I ran up the stairs completely naked in front of a house full of people, almost peed my pants and passed out in the first bed I laid eyes on.

It’s all fun and games and I’m not even embarrassed, no one can dispute it’s funny to look back on.

My drink of the night was Vodka, lemonade and blackcurrant and I got a little merry, let my hair down and had the most fun, but I didn’t get drunk drunk and referring back to my February Reflections post, that’s something I’m really happy about.

The girls and I made it out to the club at around 11pm and it was pretty quiet, but being perfectly honest I prefer it when it’s not so busy – there’s more room for me to dominate the dance floor ha ha ha.

The music was so lit at the club, every song I requested they played pretty much straight away including the best songs ‘Fire Burning’ by Sean Kingston and ‘Waving Flag’ by K’naan. Buzzing!!!!!! The photographer was about so of course the girls and I made sure to get a couple of pictures but I made the biggest mistake ever when I attempted to photobomb a group of lads, completely oblivious to the fact that they were people I used to go to school with (and let’s be clear, we were not friends back in the day). 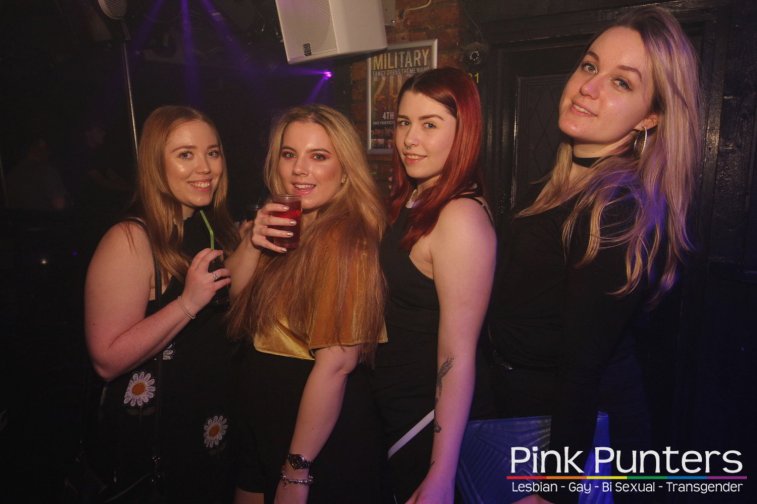 Moving swiftly on from that awkward moment the girls and I decided to have a go at Pool and we played doubles, Emily and I together #TeamJemily and Louise and Chantal playing against us #TeamChouise. Louise gave up half way through so it was Jemily against Chantal, but since I was slightly drunk and couldn’t play to save my life I ended up giving up too and just wanted to dance the night away so it was just Emily V Chantal and Emily won. Emily was actually buzzing as Chantal usually always wins at Pool, so she was so happy saying ‘I beat Chantal, I beat Chantal’. Bless her, she’s so cute!!

After our game of pool I thought hey why not use the cue as a limbo bar, so Emily held it out whilst Chantal, Louise and I got down low. I swear to God I must have pulled like 5000 muscles whilst limbo-ing.

I also like to consider a night out a form of working out so I made sure to ‘slut drop’ as much as I could – I practically completed the 3- day squat challenge in one night!

We spent the rest of the night mostly in the pop/cheesy room, although we spent a little while downstairs in the R&B room which was really fun, I was so happy when they played Major Lazer’s new song with Nicki Minaj ‘Run Up On You’! I danced so hard and was loving life, I even had a cheeky little slut drop on the pole and Chantal’s friend came up to her and said I ‘killed’ it. Lol.

I left the club at about 3/330 am and as soon as I was home I tucked into my leftover Chinese which I hadn’t finished at dinner time, so delicious (not so nutritious). I went to sleep a happy bunny as I had the best night out with my friends, sometimes spontaneous nights out can be the best ones and it was possibly my favourite night out of the year so far.

Here’s to next Friday night. (Although Nan’s coming over for her birthday tomorrow so it may not be as wild, but then again you never know with my Nan, I did bump into her at pre drinks once, brill).

thank you all for reading.