Boo! And just like that, Halloween is over. It feels like only yesterday I was getting excited with the build up to the spooky season, I can’t believe we’re now in November! Where has this year gone? I swear it’s flown by abnormally fast, it’s scary. As was my Halloween…

Well, I’m just kidding. My Halloween wasn’t too scary, no more than it should be. But it was spooktacular.

My Halloween celebrations started last Wednesday with a cinema trip with the girls to see the spooky yet humourous movie Happy Death Day and it was the perfect film to set the Halloween atmosphere. Oh my gosh, this film was brilliant! It was intense, so much so I actually screamed out loud in the cinema, it was funny, it was romantic and the plot twist at the end had me so pleasantly surprised. I loved it! I’m already looking forward to when it comes out on DVD so I can rewatch. I think it’s one of those movies that once you’ve seen once you just want to watch again so you can connect all the dots and pick up clues you may have missed before. I’d definitely reccommend.

Thursday was the day for my family Halloween celebrations and my sister came over to join mum, dad and I for an evening of pumpkin carving and general Halloween fun. Can you believe my dad is turning 60 this year and this was his first time carving a pumpkin?? Bless him, you could tell it was his first time as he started carving before he’d even taken out the guts!! He’s funny, I love him so much! And do you know what he did in the end? He got our carrot peeler which is circular shaped and pushed it through the pumpkin creating holes, so it looked like R2-D2. Brilliant! My sister took her pumpkin carving seriously, creating a cool spider design! She really was dedicated as she started carving one side of the pumpkin, decided she didn’t like it and restarted on the other side. My mum created a cute little pumpkin and used the eyes she’d carved out for ears which I thought was a sweet little touch and me, well I went overboard with the decorations adding fake blood and glitter to mine! Overall, whose do you think looks the best? 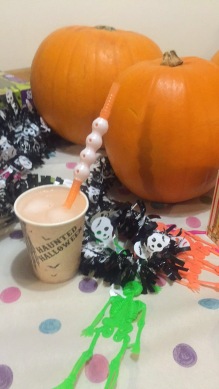 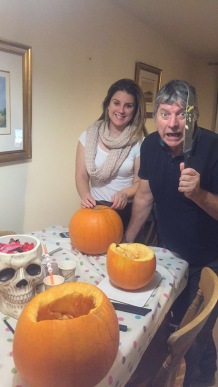 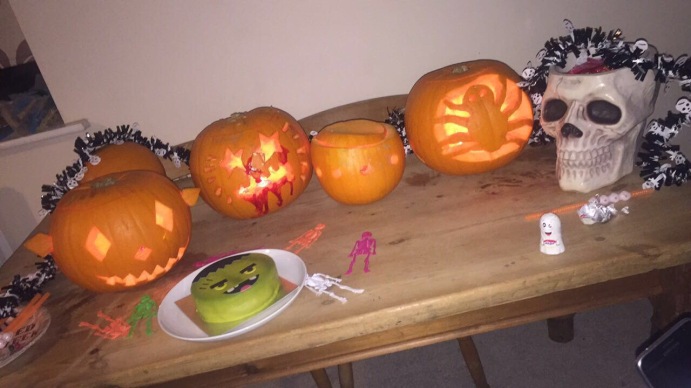 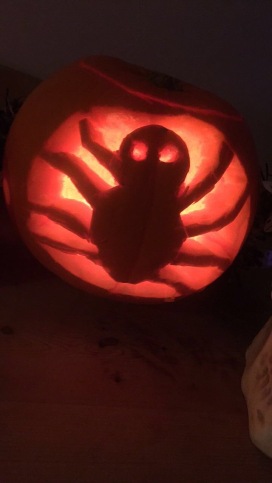 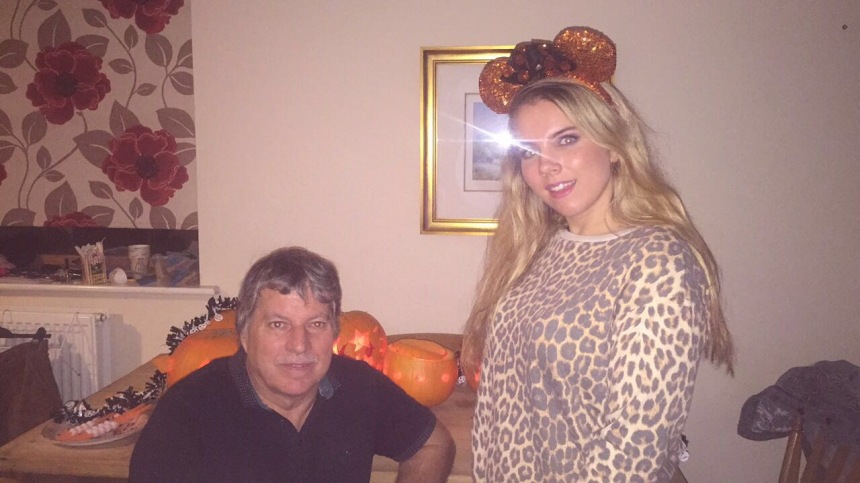 Let me know which pumpkins your fave in the comments (definitely the one with fake blood, yeah?)! 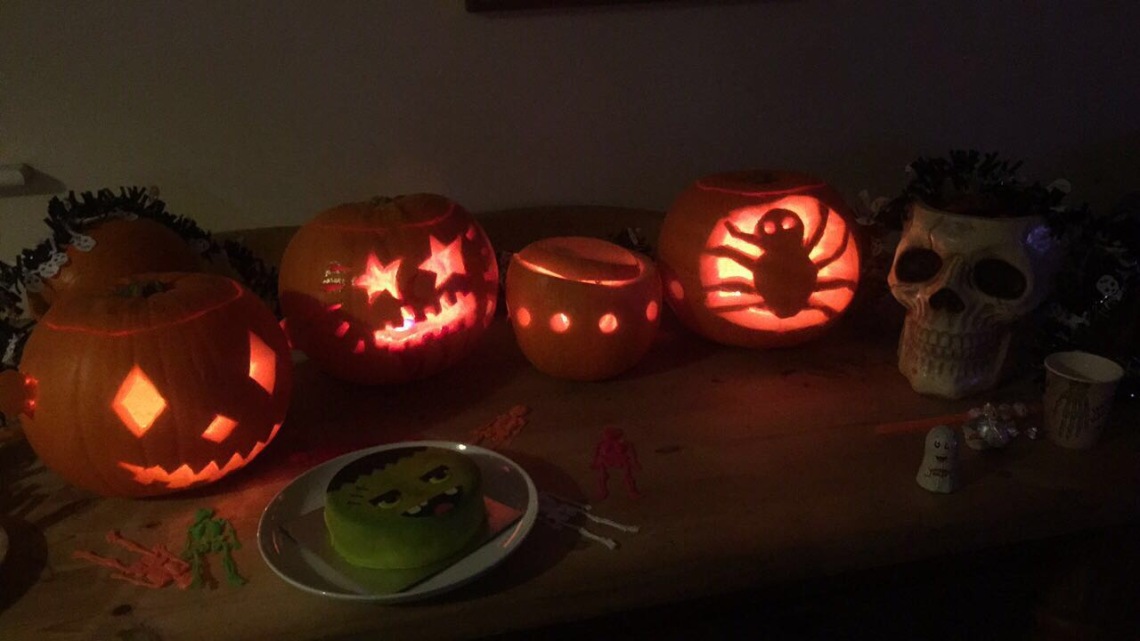 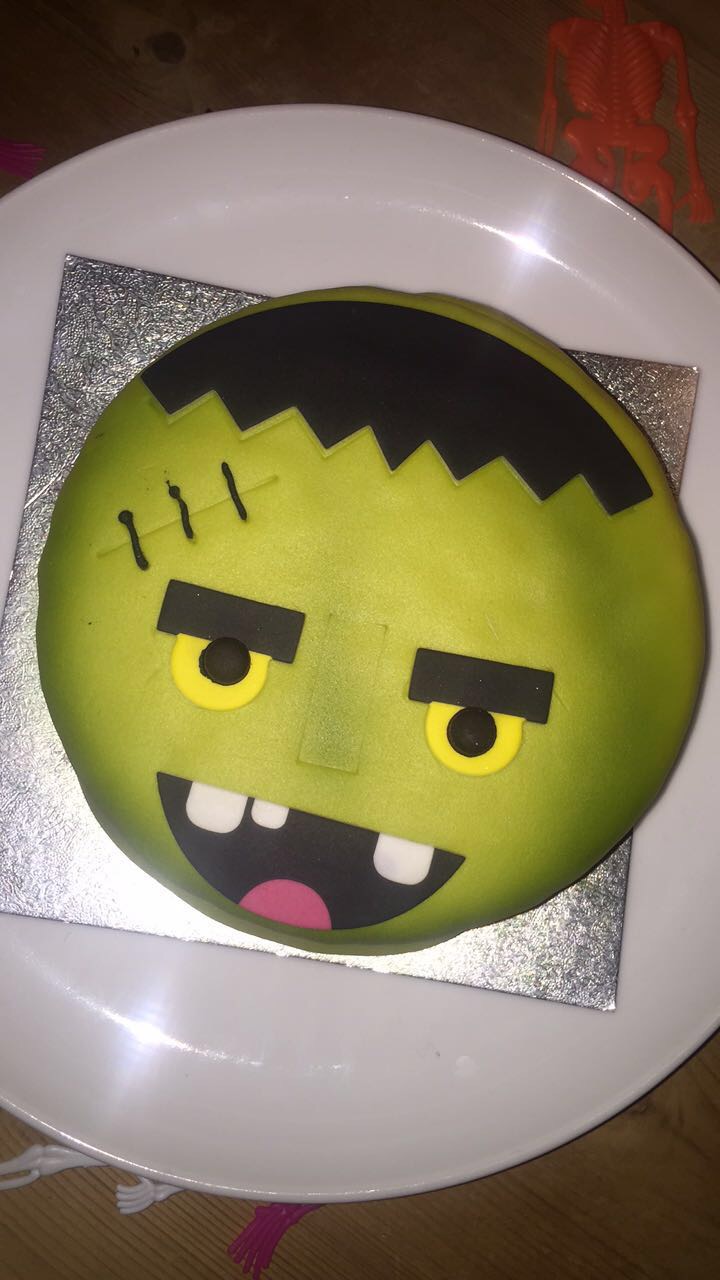 On Friday I went out with my work squad for a general dinner and drinks session, but the hardcore members of the group (aka Felicia, Brad and I) decided we should definitely dress Halloween-y. Atlanta (that’s Felicias real name) wore a top that said ‘I only date Vampires’ which proper made me giggle, and she wore red glitter like blood coming down from her eyes, Bradley created an awesome Halloween makeup look (he’s so talented) and I wore a spider flower crown I picked up from Claire’s accessories earlier that day. Wearing a flower crown really took me back to my younger years but I did think it was pretty awesome that it was spidery and I received so many compliments wearing it so all in all a good purchase. I will definitely be wearing it again next Halloween! The night itself was fantastic too, with great company and great memories made! Highlights include dancing with maracas and doing the conga in revs de Cuba, singing to Disturbia in the smoking area of Missoula and of course dancing the night away in pinks. I love my work squad! 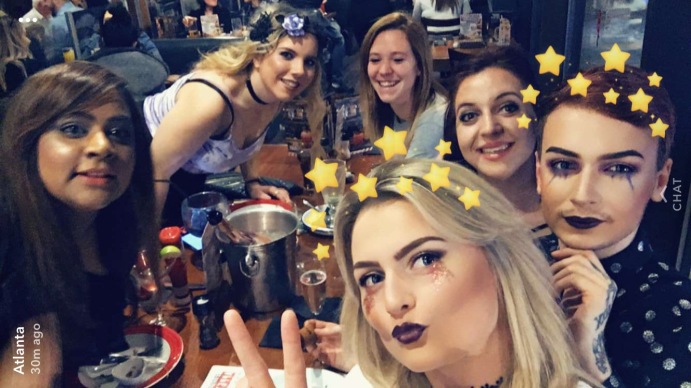 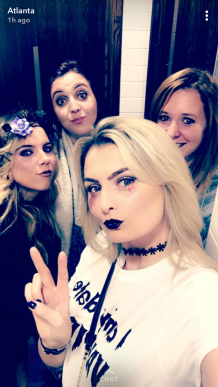 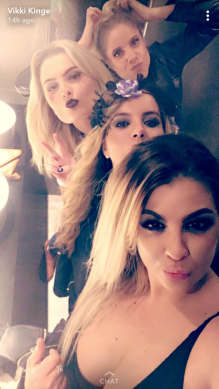 Saturday night was girls night with my Huns and we headed over to Watford to celebrate Halloween in nightclub Pryzm. Gosh, I can’t tell you how refreshing it was to go somewhere new and out of MK for a change. I forgot how good nightlife could be! It’s been so long since I’ve been on a night out somewhere new and it was amazing. Pryzm is a brilliant club with plenty of space to dance and a ton of bars so you never have to queue too long. They even have a photo booth there which I thought was so cool and Emily and I made sure to get our photos taken!! I love the fact the pictures print out, it makes for a great keepsake. The best room in Pryzm definitely had to be the upstairs cheese room which plays all the fun pop music old to new, from Grease to Little Mix to Michael Jackson to Bruno Mars. Amazing. I’d say generally the music in Pryzm is pretty fantastic, something I thought the minute I walked in. The only thing which could have made the night better was a decent fast food place to grab some munch afterwards, as all that was open was one kebab shop which had the worlds longest queue and a subway, which didn’t heat food up past 3:30am. Ridiculous. We were all left with cold subways for the journey home. It could have been worse, we could have had nothing but still. Overall the highlights of the night were definitely going out somewhere new with my girls, dancing and having fun in the cheese room, photoboothing with Emily, playing drinking games on the train, having a hilarious photo shoot at the train station thinking we’re so candid, almost getting stranded alone on the platform, getting called ‘red dress’ by some guy even though I was wearing a jumpsuit and generally just making silly memories with my loves! 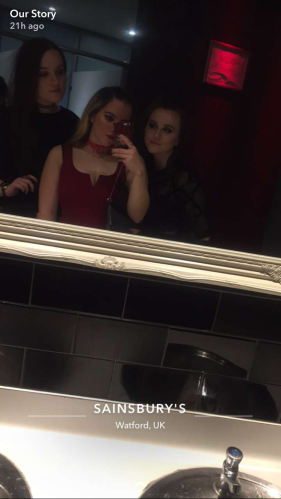 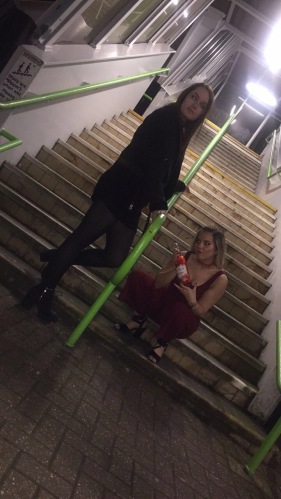 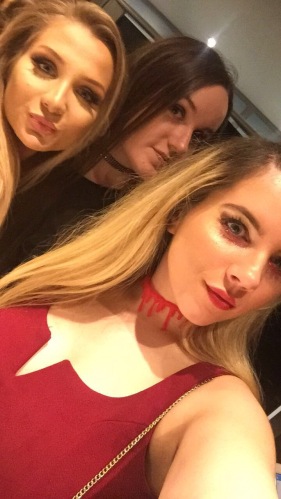 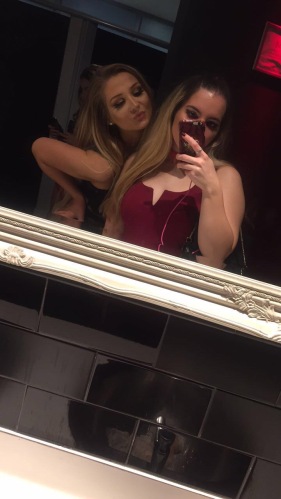 On Sunday, Emily, Chantal and I were supposed to go on another night out for Halloween but as Em and I had been out the night before we both agreed we were too sleepy so on Monday we decided to go for a hangover free breakfast together. It was super cute to chill with the girls and Chantal brought with her our Amsterdam gifts as she went in September. She bought me a super cute postcard and shot glass which I just love. I can’t wait to stick the postcard up on my postcard wall. Thank you Chantal. The rest of the day was spent shopping and frolicking around. Emily and I paid off our Magaluf deposit and had a look at Disney Land Paris holidays, the three of us went to The Range and enjoyed looking around all of the Christmas aisles and together we all just had a lovely, cute day. I can’t wait to see my girls on Thursday.

Finally, yesterday, the big day (Halloween) was spent relaxing until my parents arrived home from work. Then it was time for a Halloween movie, because what better way to spend the day of Halloween with your loved ones watching a scary film? We opted for Get Out, which I saw this year at the cinema and thought was amazing. It’s a brilliant film which is thrilling, creepy and intense and I thought it was the perfect movie to watch. Then once the film was over it was time for bed, ready to sleep before waking up to bring on the Christmas celebrations. Wait, it’s only November??? Oh well, it’s never too early to get festive! Let the countdown to Christmas begin!

How did you celebrate Halloween this year? What were your Halloween highlights? Let me know in the comments below.