Hi huns! Welcome back to my Vegas Vacation recap!

Today I bring you part 3, where we’re following on from dinner at The Sugar Factory, to another amazing Cirque Du Soleil show & a groovy lil’ night out, let’s get into it…

So on the Thursday evening, after dining at The Sugar Factory, Emily and I had exciting plans to see another Cirque Du Soleil show. After seeing ‘O’ on the Tuesday we enjoyed the experience so much, we knew we had to see another Cirque performance on our trip. We decided to go for the Michael Jackson show – ‘ONE’ – a performance themed around MJ’s legendary music. I really wasn’t sure what to expect from this one being that the theme was so different to ‘O’s’ water based acrobatics, but no matter what I could have expected, this performance blew my mind. It was phenomenal and so, so enjoyable.

Completely different to ‘O’, but still completely magnificent. The talent that the Cirque Du Soleil team have, from the performers, to the choreographers to the lighting people, everyone is just incredible, we are so blessed to have such talented people in the world who provide us with such out of this world entertainment. Honestly, this show was fantastic.

One of my favourite performances was to the hit song ‘Beat It’ which was so cool, and they also had a silhouette / shadow routine where they performed behind a screen type of thing, moving their bodies to create silhouettes which form magnificent shapes such as animals. Truly breathtaking and creative. Wow wow wow.

The ONE show is performed at the Mandalay Bay hotel, and I ONE million percent would go and see it again. Fantastic!!!

After the awesome Cirque Du Soleil performance, we had plans to head on over to the ‘Coyote’ bar in the New York, New York hotel, the bar obviously inspired by the famous film ‘Coyote Ugly’ which I love, fyi.

It was actually still a little early when we arrived, so the bar was a little quiet, Emily and I just sat at the edge of the bar drinking our drinks, which were overly strong, waiting for the crowd to pick up. The Coyote’s were so good bless them, dancing on the bar, and they were really trying to get the crowd off their seats and out onto the dance floor. Eventually, of course, the crowd did pick up, so the Coyote’s could perform to a more buzzing crowd.

‘Coyote’s’ is a small bar, so in order to use the bathroom you have to leave the bar and head down into the casino. On one of our visits to the bathroom, we were stopped by some guys who work for ‘Chippendales’, a male dance act. They have a booth set up where you can take your photos with them, so naturally, we had to take some.

I’d share my picture here, because it’s funny, but I don’t feel comfortable with having it flashed on the internet forever LOL so if you want an idea of what to expect from a Chippendales shoot, maybe just search them up on Insta and I’m sure you’ll get an idea, LOL.

On another of our visits to the bathroom (lol adventure), we met some other guys who were just hanging out and so, made some friends and spent the rest of our night with them. We headed back to Coyote’s for a dance, and finally I fulfilled a dream of mine to dance on the bar.

Yes, I danced on the bar in Coyote’s woop woop! Exciting times!! Because of this, I got a free shot which tasted yummy and a little fruity, and it was so much fun dancing on the bar with a few other gals. I’d definitely do it again!

Afterwards, Emily, myself and our new pals headed out and wandered around the strip, I believe we ended up in the MGM Grand hotel for a little bit, where we just hung out, before heading back to the strip where we ended up grabbing some food before calling it a night, Emily and I heading back off to our cosy Paris hotel ready for some sleep.

The following day (or should I say the same day considering we were out past midnight, haha), we had lots planned!

In the morning, Emily and I headed on over to the New York, New York hotel to ride the New York, New York roller coaster. FINALLY! This has been on my bucket list for so long, especially after the first time I visited back when I was a teen I didn’t go on it! It wasn’t what I remembered it to look like at all, but I guess I hadn’t seen it for a good 10 years. Anyway, the coaster was SCARY at first, I was freaking out (shocker from me), I just felt like the restraints weren’t safe enough but obviously, I was just panicking because they were fine. The roller coaster itself however was so uncomfortable. Normally if a coaster’s a bit rattly, I can deal with it because I just take it as part and parcel of riding a roller coaster, you know, it might be a lil’ bit uncomfortable but nothing that I can’t accept being that I’m on a coaster, but goodness gracious this one was too much even for me. I couldn’t believe how horribly uncomfortable this coaster was, proper knocking my head about. It was great to ride it and experience it, and laughable at how rattly it was, but oh goodness my little head was relieved when it was over! I’m glad we did it though!

Later on that afternoon, we had plans to go horse riding.

We had a sunset tour booked with Wild West Horseback Adventures which was so cool, located on a ranch which is so authentic, they only had a portaloo for us to use if we needed the bathroom. LOL. 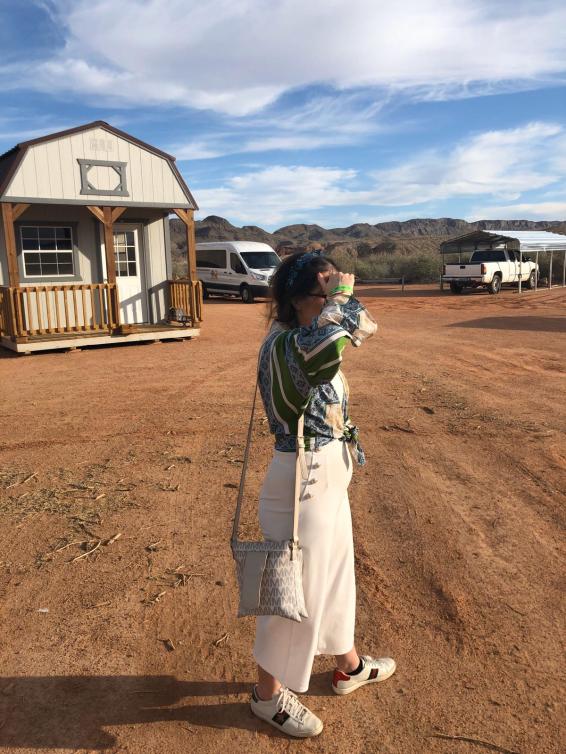 Here, along with the precious horses, there were also goats, wildlife and of course cute lil’ dogs. I miss this place, again, like with Route 66, this is what America is to me… horseback riding, the Wild West, sunsets… so dreamy.

I wasn’t expecting to be as nervous as I was, but being that I’ve never ridden a horse before except once when I was a toddler on a pony, obvs being guided and helped massively, when it came to actually getting ready to get on the horse, and actually being on it, I was freaking out. At one point, I wasn’t even sure I could do it. Being on the horse was… unusual. High up (obvs) and a new experience for me. I was worried the horse would potentially rear up on its back legs, sending me flying, and we also had no helmets, but the tour guide reassured me I’d be fine and after a few minutes settling onto my horse, my nerves calmed and I began to relax and trust my horse named Cricket. It knows what it’s doing, after all.

Our tour was a Sunset BBQ tour, meaning on our trail we got to experience the best, most peaceful views of the Wild West at Sunset. Breathtaking.

I’m not sure how long we were out riding for, being that I didn’t check the time when we set off or when we got back, but our horses all went at a relatively slow, calm pace. They were easy to guide and stop when needed, and I was even right at the back! I swear, it’s always when I’m nervous about something that I end up at the back, it’s happened on horror mazes too… LOL.

By the end of the trail, my butt was actually starting to get a little sore from the horse riding. I don’t know why this happens but I was thinking, even though I’m loving this trail, my butt will feel so relieved when we’re off, but then when it came to having to get off the horse I was thinking ‘Shit, I’m scared to get off’. I got myself on, now I had to deal with getting off. Sometimes it’s the unknown that’s scary, but of course as with everything, I was fine.

We got some photos with my little horse Cricket, then headed into the ranch (cabin, hut, I don’t know what it’s called) for our dinner where I was pleasantly surprised to find the vegetarian dinner option that I’d ordered was actually quite good. It was some kind of veggie patty, with a potato and corn on the cob. The potato was huge, I couldn’t finish it all.

After we ate, we headed outside to the fire pit where we chilled for a bit, before being driven home by one of the tour guides. 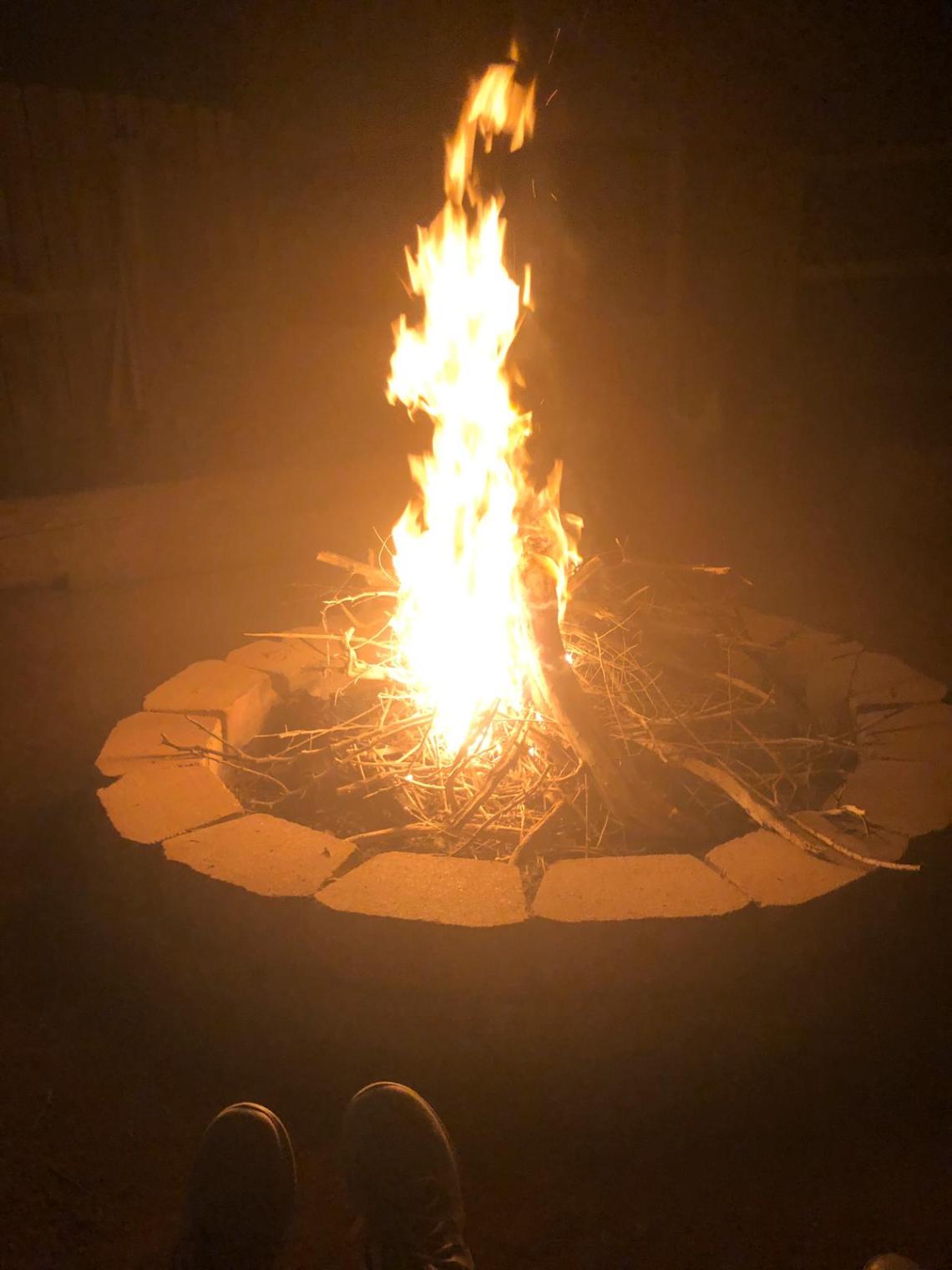 We had plans to go to Fremont Street that evening, but honestly we were so tired when we got back, we just headed straight to bed to got some rest, ready for the following day…

Are you a fan of roller coasters?

What’s the best coaster you’ve ever been on?

Have you ever been horse riding?

Please let me know all your thoughts in the comments below,

as always thank you so much for reading,